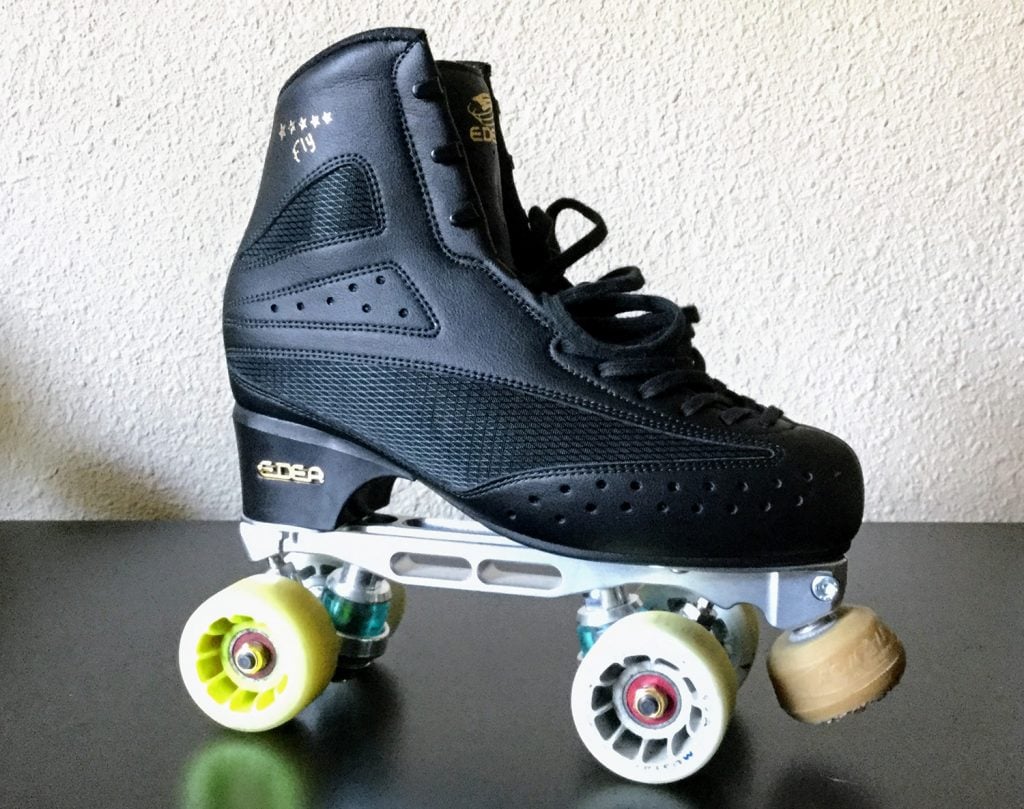 I was feeling off one day because of a combination of allergies, all the smoke from fires in the area and eating somewhat crappy over the weekend (too much sugar and cheese) but still I went to the rink for at least an hour of practice. I really had to force myself to leave the house and once I got to rink I really wasn’t feeling like being there. Despite that, I started to practice. My coach introduced me to loops the previous week, so I started with them. I was getting comfortable on my left outer forward loop, but the right outer forward still needed more work. It was, however slowly getting there. Not bad considering I had never done them before the past week. I did about ten minutes of loops and moved to figures. I’ve been working on brackets and counters, and I’m starting to turn them clean every time now.

I was still feeling like crap, but I put on my freestyle skates to work on a few things. First off, I always practice some upright, outer back spins to get used to being over of my right back edge. Afterwards, I move into single jumps. My goal this year is to get a tighter wrap in the air, so I’ve been working on getting my ankles to cross as soon as I toe off for the mapes. After working the singles, I work on the doubles. Today all my doubles were getting all the way around with no cheated landings! On my doubles, my ankles still don’t cross as consistently as I want yet, but I had them so much closer that I was doing the rotations before I knew it. I was definitely making progress!

I didn’t want to push it so I only did a few doubles and then moved on to some spins. My goal today was to work on my outer forward and outer back camels. I’ve been starting to get the outer forward, but it fizzles out after 1 to 1½ revolutions. I also have had trouble keeping my back straight going into the spin. Occasionally, if I got a good rotation or two, I would drop the camel into the left, inner back sit spin. However, it’s usually sloppy.

The definition of insanity is doing the same thing repeatedly and expecting different results. I always analyze what I’m doing and try to do things differently each practice so I don’t keep doing the same thing wrong, repeatedly. I started to think about the camel and realized my issue is balance and lack of holding the edge. On the next try I did something different for me… I pressed/pushed my left hand in the direction I wanted to go and made sure my head followed. Now I started to get two to three revolutions! I could even go to the inner back sit spin without it looking so sloppy! The camel spins have been my nemesis for over 20 years and I never could quite get them on quads but I was finally starting to understand them.

It then dawned on me in that moment that skating, no matter what you are doing it all comes down to balance but could all the skating trouble that I have had in my past and what my wife was having now come down to poor balance? Was it really that simple? I tested my theories with my wife while still working on some of my own things.

My wife had reached a boiling point. After working with her for one day on figures and getting nowhere, I then threw a crazy notion at her. I said I’m going to teach you to speed skate. She looked at me like I lost my mind but I said bear with me. She agreed, and I then said how do you walk? She had to think about it. She then started to walk and think about her steps and at first she couldn’t do it at all. She was like, crap I forgot how to walk! She then said now that I think about I don’t think I’ve ever really walked right. Lol.

I then said, when you walk, before you step with your right foot, your weight shifts to the right of your body first but your left arm swings forward to counterbalance. When you switch feet, your weight shifts to the left side of your body first and your right arm swings forward to counterbalance. I then explained that in speed skating you’re doing the same thing. We started slow by getting her shoulders and feet right for the push. Then we added her arms into the equation. After she got comfortable with that, we started working the rhythm of the shifting of the weight before taking the next step. Before she knew it, she was zooming around the rink like a speed skater. I had never seen her skate that fast and I don’t think she realized how fast she was really going. On her own, after she became comfortable, she changed from speed skating to a dance pose. She maintained the speed and looked confident! After we stopped, she said she had never felt so stable in her life on the skates! I told her it’s because you’re finally starting to understand balance.